St. Mary School,  built in 1889, is a historic landmark featuring stamped metal ceiling tiles, keystone arches, batch fired solid brick, and the hardwood plank floor cut by local 19th century mills. But the sense of pride we feel about our history goes beyond the bricks and mortar of the Main Campus building.
Since 1870, St. Mary has been providing strong academics within a faith-based community to prepare students for higher learning and to become moral, productive, God-loving leaders in society.
That's Our Mission. Then. Now. And for years to come.

In 1799 Father Gabriel Richard, the only Catholic priest in Michigan, arrived at the mouth of the Clinton River in 1799. He was the only Catholic priest in Michigan. One year later, he erected "la petite chapel," a log cabin church on the south bank of the Clinton River - our first church. As Roman Catholicism spread in Macomb County, the small chapel prospered as a large congregation, outgrowing its modest beginnings.  Father Gabriel Richard was elected the first delegate of Michigan to the Congress of the United States and was replaced by Father DeJean, who moved the church four miles down the Clinton River and renamed it "St. Frances DeSales." The new location was about three miles from the village of Mt. Clemens.

The Founding of St. Peter Parish

In 1839, Christian Clemens donated a square of land in the village of Mt. Clemens to each religious denomination specifying that it be used for religious purposes. These lots were all in close proximity to one another, explaining the large number of churches found around New Street today. St. Peter Church was built on this donated land in 1843 and merged with  St. Francis DeSales' existing congregation.

Realizing the need for a parochial school, Father Camillus Maes, Pastor of St. Peter Parish, contacted the Sisters of the Immaculate Heart of Mary Convent in Monroe, Michigan. He requested they travel to Mt. Clemens to take responsibility for the education of 80 students. The IHM nuns agreed, with the stipulation that the school be named after the Blessed Mother. An agreement was met and the nuns traveled by canoe from Monroe up to Mt. Clemens. In 1870, the first St. Mary School was built on property adjoining St. Peter Parish.

The first St. Mary School building (constructed on the New Street side of our current Main Campus) was a two story , two room, wooden structure. Boys and girls received separate instruction the two rooms. In 1889, the school was sold for $250.00 and moved to the corner of Macomb and Pine Streets. A three-story brick structure was built in its place.
With three classrooms on each of the first two floors, and an auditorium on the third, the school was boasted to be one of the finest of its day.
In 1902 the building was renovated to accommodate more students. The size of the school doubled and the third floor auditorium was enlarged. During lunch periods, students would hold "sock hops" on the third floor. Later, in 1911, ground was broken for the erection of a new high school on Market Street, which included a gymnasium and high school wing. 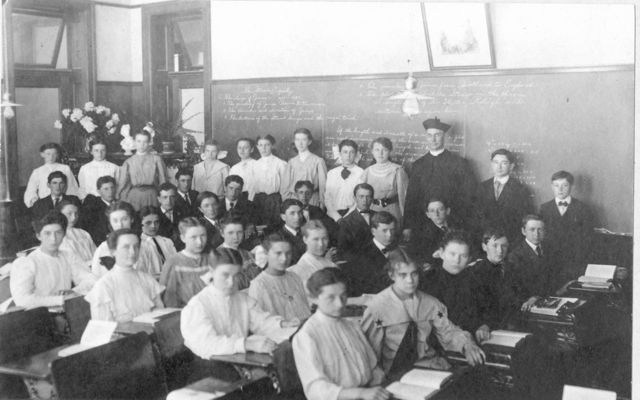 Tragedy struck on September 11, 1957 when St. Peter Church burned to the ground. The flaming church steeple fell onto the school and almost completely destroyed the entire third floor. Children attending the school that day remember diligently working on their school work when they smelled smoke. The high school students were instructed to gather their school books in their arms. They proceeded to gather the younger children and lead them to safety.  The students stood outside the burning building and prayed. Fortunately the first and second floors of the school were saved. A new St. Peter Church building was reconstructed faceing Market Street, was dedicated and reopened in December of 1960. 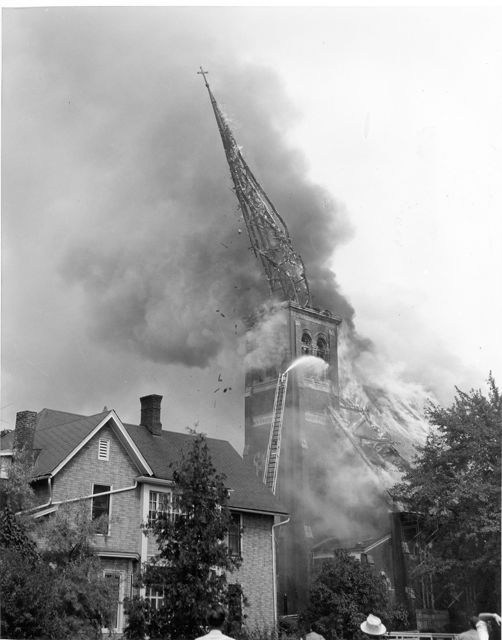 St. Mary High School was closed in 1970 . The grade school expanded and made use of the former high school classrooms and science labs. A few years later a preschool and kindergarten were added.

Many changes have been made to the Main Campus building over the years. The initial 1889 construction of the school was built before indoor plumbing. When this modern convenience was made available, the building was updated with bathrooms, fountains, and kitchens. Over time, steel doors replaced many of the original wooden doors and student safety was increased with the addition of fire escapes and fire retardant coating on the school's interior wood trim. 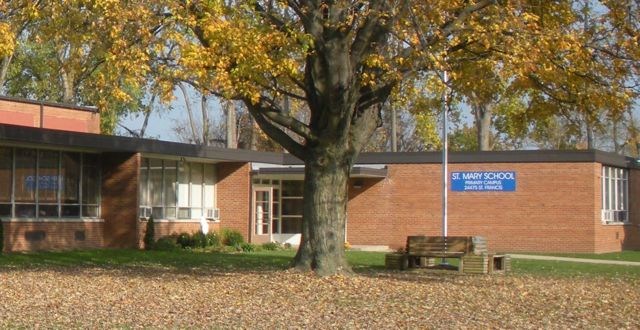 By the late 1990s, St. Mary School was growing again. A former building of the Mt. Clemens school system was purchased on St. Francis Street to accommodate the need for additional space. The building was renovated and opened in August 1999 for Preschool, Kindergarten, and First Grade students to learn and grow.

A New Home for all Students at 2 Union Street

In May of 2013 St. Peter Parish purchased the Alexander Macomb Learning Center, a recently closed public school, from the Mt. Clemens Public School system. Over the summer a great deal of exterior and interior restoration was completed and in the fall of 2013 St. Mary Catholic School opened its new doors housing all students from three-year preschool through eight grade. 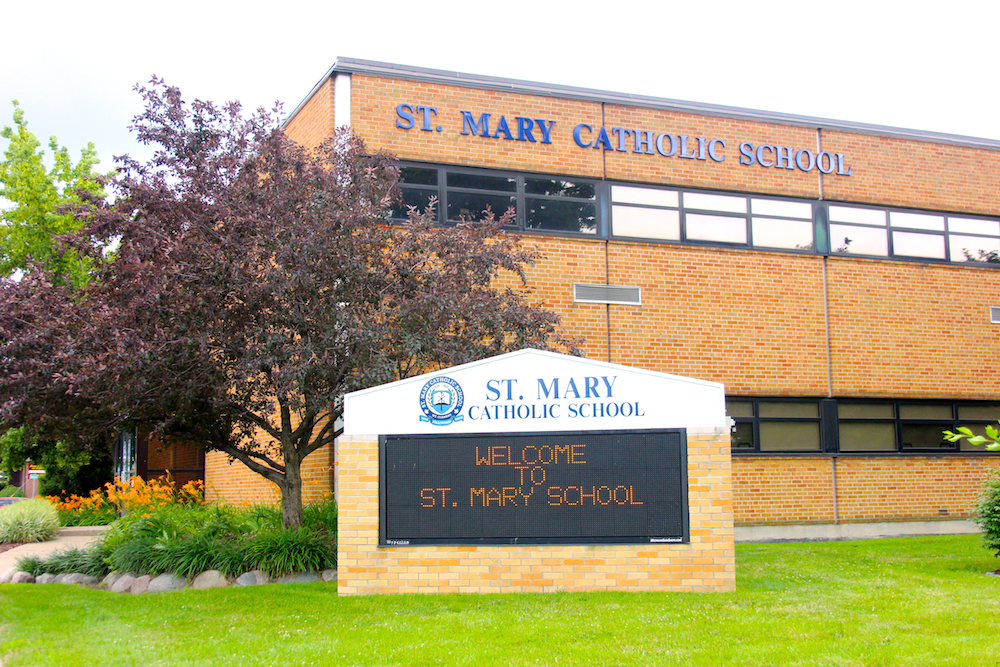 Though our facilities have changed and advanced through the years,St. Mary Catholic School continues to provide the opportunity for each student to develop into a responsible individual with deep-seated roots in their Catholic faith and their American citizenship.